You are here: Home / Archives for News and Events / Fiji MPA News

Vanua as Environment: Conservation, Farming, and Development in Waitabu, Fiji

Submitted to the Graduate Faculty of the Kenneth P. Dietrich School of Arts and Sciences, in partial fulfillment of the requirements for the degree of Doctor of Philosophy.

END_OF_DOCUMENT_TOKEN_TO_BE_REPLACED

What I Hope is a series of short videos about why people all over Fiji are putting their hearts into supporting communities improve the health of their fishing grounds and better meet their food and income needs.

END_OF_DOCUMENT_TOKEN_TO_BE_REPLACED

What I Hope – FLMMA is a series of short videos about why people all over Fiji are putting their hearts into supporting communities improve the health of their fishing grounds and better meet their food and income needs.

END_OF_DOCUMENT_TOKEN_TO_BE_REPLACED

FLMMA – Margaret Fox – What I Hope – FLMMA is a series of short videos about why people all over Fiji are putting their hearts into supporting communities improve the health of their fishing grounds and better meet their food and income needs.

END_OF_DOCUMENT_TOKEN_TO_BE_REPLACED

Check out the Na Vakekeli show to learn more about the 4FJ campaign and the need to forego the rapidly disappearing kawakawa and donu, each year, June through September.

END_OF_DOCUMENT_TOKEN_TO_BE_REPLACED

On the Na Vakekeli the 4FJ campaign hidhlights the need to forego the rapidly disappearing kawakawa and donu, each year, June through September.

END_OF_DOCUMENT_TOKEN_TO_BE_REPLACED 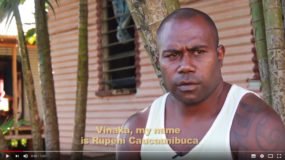 Dubbed as the greatest attacking rugby player in the world and an international rugby star, 4FJ champion Rupeni Caucaunibuca lives far from the limelight today, returning to his roots, the remote village in Nasau, Navakasiga in Bua.

But that doesn’t mean 4FJ champion Rupeni Caucaunibuca, known to most as “Caucau,” is no longer up for a challenge. Today, Caucau is on a different proving ground – raising his voice to support the sustainable management of his village’s natural resources.

And the first step for him is joining the list of champions who have pledged not to eat, buy or sell the fast declining kawakawa and donu during its peak breeding season from June through September. The two fish, commonly called grouper, are most vulnerable during these months because they aggregate or gather together at one spot in numbers to breed. And most of these sites are known to fishermen who harvest them just before they release their eggs.

“These two fish are loved by people in my village, especially for us at home because mum is one of those who is very experienced in fishing and there’s my cousin who also dives for fish,” said Caucau.

He said they used to eat a lot of kawakawa and donu in those earlier days and has his favourite way of eating them.

“They are nice fish to eat because they have more flesh and less bone. And delicious to have them with lemon and chillies and they are just the best,” said Caucau.

Caucau who grew up in the village also recalls his days of spear diving before he started his rugby career and the same resources is what he turns to now to feed his family.

“I used to go diving but never used a spear gun. I used a piriki (an iron rod with rubber) and after my rugby games, I got back to using piriki again. Fish that I catch are just for consumption but sometimes sold if it need be,” he explained.

He said catching fish was not a problem for his people in earlier days as their fathers used to fish just along the coast. But life in the village is now changing and not easy as people depend heavily on their declining natural resources to put food on the table and for income.

“During my childhood I used to notice the number of fish caught. We would just go up along the coast and find a lot of fish in these mangroves, and big ones too, but nowadays we would only catch a few and not too big either,” Caucau said.

“If we want to catch bigger fish we would have to pay for fuel for which we would need about four to five gallons of benzene because it is further out,” he added.

Watching these changes has motivated Caucau to champion the 4FJ campaign.

“I will be the first to support it in my village because I know I will not be just considering myself but those coming after me, since I also have children,” said Caucau who now has three children.

He said he was thankful to learn why kawakawa and donu were declining in Fiji and what he could do to help revive them. Caucau has made up his mind to influence his village to leave them alone during their breeding season.

“I am asking if they could stop fishing them or spearing them when they are breeding and to leave them alone because we will reap the benefits later. Having more of them is up to us, and we are not asked to let them breed for a year, but just a few months,” said Caucau.

“For these two fish, we are going to stop eating them because we want the numbers that have decreased, to increase again … that there will be many of them. My request is that we ban fishing them from June through September,” he said.

The Fiji Locally Managed Marine Area (FLMMA) Network is a non-profit and charitable association of resource conservation NGOs, government departments, academic institutions and over 400 communities working together to promote and encourage the preservation, protection and sustainable use of marine resources in Fiji by the stewards of these marine resources.

In Fiji, this community management is coordinated by the Fiji Locally Managed Marine Area Network (FLMMA), which was established in 2001 and registered under the Charitable Trust Act since 2004, and provides information and resources on LMMAs and community-based adaptive management and training in project design, monitoring, data management and analysis, fundraising, communications and more.

These coordinated efforts have resulted in 135 of Fiji’s marine iQoliqolis (customary fishing areas) being managed and having about 467 fishing reserves or protected areas covering just over 1000 km2.

FLMMA approaches can result in improved human well-being through increased capacity to manage or adapt to short and long term threats, thus supporting objectives for community resilience under the National Climate Change Policy, and protect ecosystems and vulnerable species from ridge to reef, assisting Fiji to meet its commitments under the Convention on Biological Diversity.

More than 120 people gave onlookers at the Fiji premier cultural festival a surprise thrill, breaking out into dance to “Stayin’ Alive” by the Bee Gees as part of an off-beat effort to launch the Fiji 4FJ campaign.

END_OF_DOCUMENT_TOKEN_TO_BE_REPLACED 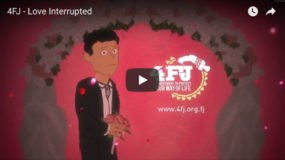 The 4FJ campaign is a movement to protect our way of life in Fiji. Protecting Groupers locally known as Kawakawa and Donu during spawning period is not about fish but protecting our way of life.

In 1998 the Waitabu Village of Taveuni declared its fishing grounds or "qoliqoli" to be "tabu" -- a no-take fishing zone. NZAID initially supported the designation with funds for biological surveys and administration. The Wainileli and the Bouma qoliqoli, were continually and heavily overfished, resulting in small fish stocks and damaged coral. Through the continuous drive of community members and non-governmental agencies, the region is now celebrating a healthy and abundant reef for the past 20 … END_OF_DOCUMENT_TOKEN_TO_BE_REPLACED