You are here: Home / Marine Life

Spreading over 27 hectares, the Waitabu Marine Park supports a wide variety of wildlife. From the dense forest covering the island of Taveuni to the coral reefs of Waitabu, you will see a wide array of native species.

The Waitabu Marine Park has been protected as a part of the Bouma National Heritage Park and is locally managed by the communities of Lavena, Waitabu, Vidawa and Korovou.

Located on Fiji’s Taveuni Island, Waitabu Marine Reserve is a vibrant reef set aside for the benefit of snorkel tourism and environmental education. The marine reserve is in close proximity to the Indo-Pacific center of coral reefs where the world’s greatest concentration of marine biodiversity is located. In 2006, according to the Waitabu Biological report, a dramatic increase of coral cover occurred, believed to be in response to an increase in herbivorous fish and resulting decline in algae. Come and see the many species of marine wildlife:

You may also see:

After many years of overfishing and damaging fishing methods, the giant clam has developed a successful breeding ground in Waitabu.

Found in the Indo-Pacific region, this species reaches 3 feet (the females largest size) to 6 feet (the male).  The humphead is easy to spot with its bright electric blue, green and purple coloration 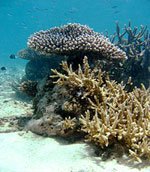 Many beautiful hard and soft coral species reside in Waitabu such as this hard coral grown atop a beautiful artificial reef “fish house.”

If you are lucky and have an eye for detail, you may see one of these beautiful species including the Trochus or Spider Conch shell.

In 1998 the Waitabu Village of Taveuni declared its fishing grounds or "qoliqoli" to be "tabu" -- a no-take fishing zone. NZAID initially supported the designation with funds for biological surveys and administration. The Wainileli and the Bouma qoliqoli, were continually and heavily overfished, resulting in small fish stocks and damaged coral. Through the continuous drive of community members and non-governmental agencies, the region is now celebrating a healthy and abundant reef for the past 20 … END_OF_DOCUMENT_TOKEN_TO_BE_REPLACED