Here are the results from the 9 Marine Survey Presentations given by the Community on 13 March 2015.

Much of the shallow coral on top of the reef died after high water temperatures and bleaching in February 2014.

This was expected, and although we now have a lot of dead coral covered with fine red algae, corals on the outer reef slopes are still http://hesca.net/soma/ healthy and can be used in future coral planting once the hot times are over.

Soft coral beds are expanding into some of the places previously covered in hard coral.

2. Jolame Masilaca – Crown of Thorns Starfish “Bula” across the reef 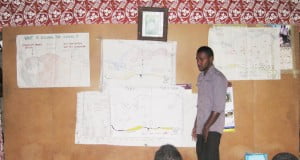 After two years of plague-level Crown of Thorns (COTS), which have been killing and eating the coral, COTS numbers are now dropping.

This is caused by the death of much of their preferred coral food due to the hot water.

Without their coral food, older COTS will die and younger COTS will not grow to breeding size, so we are hopeful that the death of coral from bleaching will get rid of the COTS, allowing for faster coral growth in a few years.

Much of the invertebrate life has not changed over the last 4 years.

However some Giant Clams “Vasua” seem to have disappeared from the reef tops around the deeper cut in the Marine Park, and Tripneustes Collector Urchins “Cawaki” have disappeared from both the permanent and temporary Tabu protected areas, except for one spot near Sekeci point where hundreds were seen on the rocky seafloor.

While the loss of Giant Clams “Vasua” may be due to poaching by humans, the drop in “Cawaki” Urchins is thought to be due to an increase in predatory fish which eat them.

Much of the fish life has not changed over the past 4 years. In the year after the temporary protected area “Tabu Tara” was formed, there was a high spike in fish numbers, which has now settled down to a lower level, although still much higher than that seen when active fishing was going on.

Invertebrates in the Tabu Tara have not changed much, but in the permanent protected area “Tabu” Crown of Thorns “Bula” have fallen significantly as they die off from lack pf coral food.

Giant Clam “Vasua” numbers were also down, probably as a result of illegal fishing.

For the first time since 2003 no Cawaki were found on either side of the Tabu/ TabuTara border.

This is thought to be due to the “Spill-over” effect of the Tabu Tara.

Last year groupers were seen eating Cawaki Urchins near the border, and it is now reported that larger fish are seen all over the area.

More Giant Clams “Vasua” were found in the Tabu Tara than in previous years, and they are getting larger (average size 17.6 cm).

Fewer than usual were seen in the Tabu, and the average size was smaller (24.4cm). Several large empty shells were seen.

There is a strong suggestion that illegal fishers poaching fish from the Tabu cut have also started taking Vasua.

At this time there are sufficient clams over 30cm long to continue breeding, and if the poaching can be stopped, it is likely that the population will recover.

More and larger Trochus shells were found on both sides of the border between the Tabu and the Tabu Tara.

The Tabu Tara shells are increasing in size (average bottom width 11.7cm), while the average size in the Tabu has dropped to 11.29 cm.

It is thought that the Vivili are spreading out from the Tabu into the Tabu Tara, giving room and food to increase breeding and numbers.

Far fewer Sea Cucumbers were found in the permanent Tabu than in past years.

This applied to low value “Lollyfish” not just high value Sea Cucumbers, so is not thought to be due to illegal fishing.

In the Tabu Tara a greater variety of species were found, and overall sizes were larger than previously recorded, gaining breeding size for many species.

It is possible that some Sea Cucumbers have moved from the Tabu area to the Tabu Tara, where algal cover and hence food is found in greater amounts.

It is hoped that these Sea Cucumbers will gain sufficient density to create breeding populations in the Tabu Tara which may be sustainably harvested in the future. 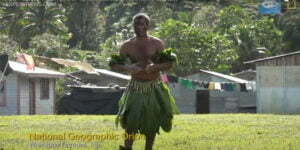 Guests are welcomed to a Fijian village with a traditional kava ceremony and demonstrations of crafts, cooking, music, and dance. Video by Rodrigo Moterani aboard the National Geographic Orion in Waitabu, Taveuni, Fiji.

Briefing was conducted by the Helen Sykes, team were shown how to take measurements of sea animals (sea cucumbers and trochus) and how the (CPUE) Catch per unit effort works. Today’s survey will take place at Tabu area ( Marine Protected Area).

In 1998 the Waitabu Village of Taveuni declared its fishing grounds or "qoliqoli" to be "tabu" -- a no-take fishing zone. NZAID initially supported the designation with funds for biological surveys and administration. The Wainileli and the Bouma qoliqoli, were continually and heavily overfished, resulting in small fish stocks and damaged coral. Through the continuous drive of community members and non-governmental agencies, the region is now celebrating a healthy and abundant reef for the past 20 … END_OF_DOCUMENT_TOKEN_TO_BE_REPLACED